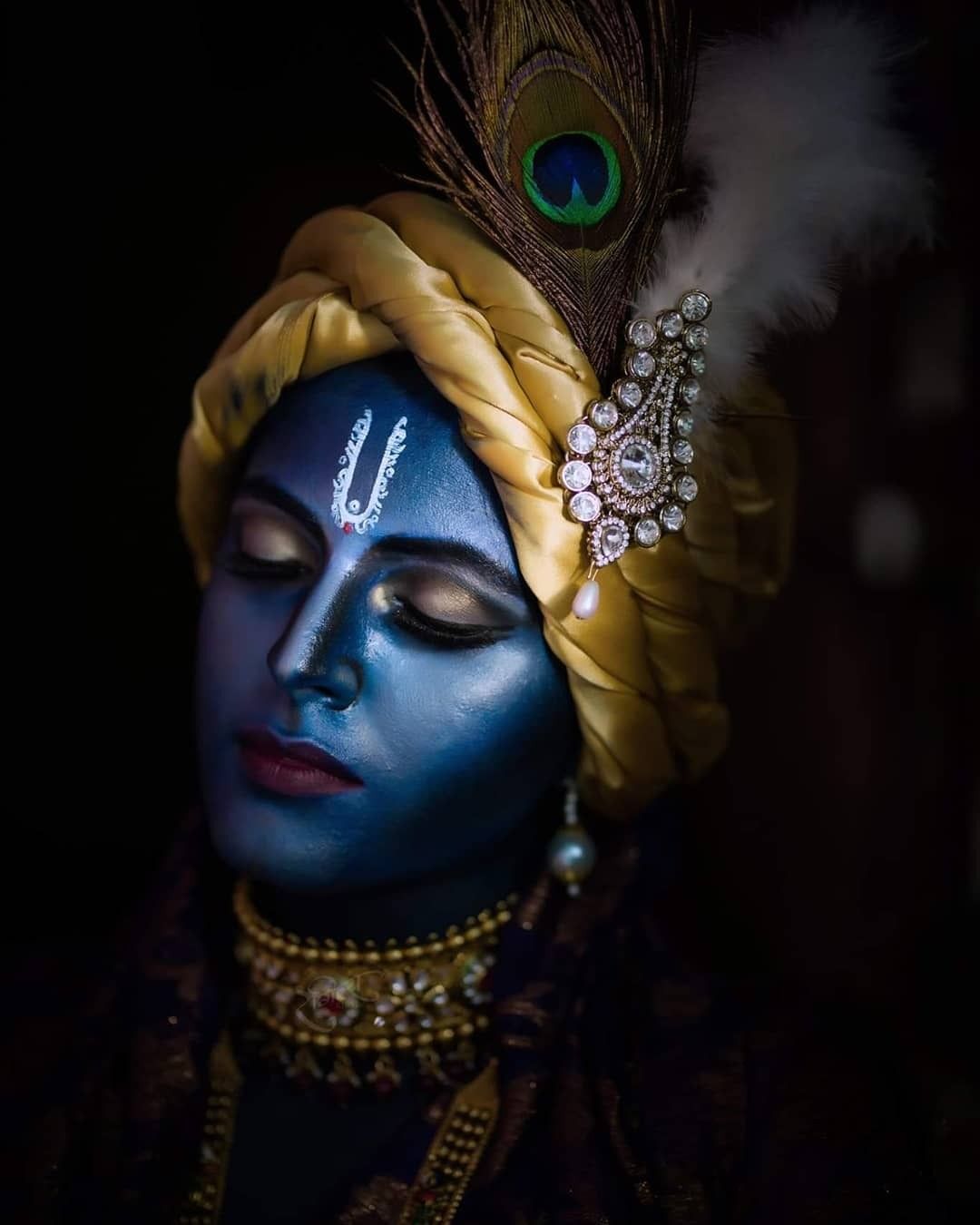 Before the assembled Kurus and pandavas, when Duhshaasan caught her hair and clothing, Krishna (Draupadi), having no other Lord, cried out, “Govind, Damodar, Madhav ! ” 1

Though desiring to sell milk, dahi, butter, etc., the mind of a young gopī was so absorbed in the lotus feet of Krishna that instead of calling out “Milk for sale,” she bewilderedly said, “Govind !, Damodar !, Madhava !” 3

Their grinding-mortars full of grains, the gopis minds are overcome as they thresh with their pestles, singing “Govind !, Damodar !, Maadhav !” 4

A lotus-eyed girl instructed the red-beaked pet parrot that was seated in the cup of her lotus hand; she said, “Govind !, Damodar !, Madhava !” 5

In each and every house, a large group of Gop-women is engaged in making the caged parrots constantly utter with broken words, “Govind !, Damodar !, Madhava !” 6

With the little boy lying in the swing, all of the gopis used to expertly sing compositions set to musical notes and rhythm, they sang, “Govind !, Damodar !, Madhava !” while putting Him to rest.7

The younger brother of Balram, playing mischievously, was dodging about her with restless eyes. Taking a ball of fresh butter to lure Him over, a gopi called Him, “Govind !, Damodar !, Madhava !” 8

O my tongue, since my mouth has become like a lotus by dint of the presence there of these eloquent, ornamental, delightful syllables, you are like the swan that plays there. As your foremost pleasure, always articulate the names, “Govind !, Damodar !, Madhava !” 9

The one and only Lord of Goddess Lakshmi, as an inconspicuous little cowherd baby, was seated in the lap of mother Yashoda, drinking her breast-milk. Merged in bliss, she addressed Him as “Govind !, Damodar !, Madhav !”

In Vraj-dhaam, Krishn was playing with His playmates, the boys of His age who protected the animals. With great love, mother Yashoda called out to her own son, “O Govind, Damodar, Madhav!” 11

Being firmly tied up to the grinding mortar with a cow’s rope by mother Yashoda, the plunderer of butter softly whimpered. “Govind, Damodar, Madhav”

In His own courtyard, Krishn was carelessly playing with a bracelet. So the gopi took a ball of butter to Him, and shutting His eyes with her palm, she distracted Him, “O Govind, Damodar, Madhav”

In house after house, groups of cowherd ladies gather on various occasions, and together they always chant the transcendental names of Krishn–”Govind, Damodar and Madhav”

His face is pleasing, and the flute at His lips is filled with Divine sound. Amidst the Cows, Gopas, and Gopis, He stands at the base of a coral tree. Govind, Damodar, Madhav!

Having risen early in the Brahm-muhoort, and remembering the childish activities of the Son of mother Yashoda, the Gopis loudly sing while churning butter–”Govind, Damodar, Madhav!”

Having churned and then set aside a fresh lump of butter in the house, mother Yashoda was now suspicious–it had been eaten. She said, “He–Murari! Govind, Damodar, Madhav, now tell me the truth” 17

Having finished worship at home, a young Gopi, (like) a strong flow of love for Krsihna, churned the butter, and then joins together with all the Gopis and their friends and they sing, “Govind, Damodar, Madhav!” 18

One time, early in the morning, just as a girl had put aside her churn in a pot full of butter–she saw Mukund. She then began to sing songs in various ways, about Govind, Damodar, and Madhav.

(Without having even bathed or eaten,) Krishna was absorbed in play. Overwhelmed with affection, mother Yashoda, who thought only of her son’s welfare, called out, “Govind, Damodar, Madhav! (Come, take your bath and eat something.)”

Devaṛshi Narad and other Munis are always surrendered to Lord Vishṇu, who rests upon His couch. They always chant the names of  “Govind” ,“Damodar” and “Madhav” and thus they attain spiritual forms similar to His. 21

After giving up sleep at dawn, having completed their ritualistic duties, and at the end of their Vedic chanting, the best of the learned brahmanas always loudly chant, “Govind, Damodar, Madhav”. 22

In Vrindavan, seeing Shrimati Radharani overwhelmed with separation from Govinda, groups of gopas and gopis sang, with tears in their lotus eyes, “Govind! Damodar! O Madhav!” 23

The cows having already gone out to graze early in the morning, mother Yashoda gently roused her sleeping son with the palm of her hand, softly saying, “Govind, Damodar, Madhava.” 24

With long, matted hair the color of coral, and bodies purified by eating only leaves, water, and air, the sages sit beneath the trees and chant, “Govind,” “Damodar,” and “Madhava.” 25

“After speaking these words, the ladies of Vraj, who were so attached to Krishna, felt extremely agitated by their imminent separation from Him. They forgot all worldly shame and loudly cried out, “O Govind! O Damodar! O Madhav!” 26

Sometimes a Gopi is engaged in teaching a parrot within a jewelled cage to recite names like: “Aanand-kand” (source of bliss), “Vraj-chandra” (moon of Vraj), “Krishn” “Govind” “Damodar,” and “Madhav” 27

The lotus-eyed Lord was tying the Shikha of a cowherd boy to the tail of a calf when His mother caught Him, lifted up His chin, and said, “Govind! Damodar! Madhava!” 28

In the early morning a group of His favorite cowherd boys arrived, stick-canes in hand, to take care of the cows. They addressed the unlimited, primeval Personality of Godhead, “Hey, Govind, Damodar, Madhav!” 29

When Lord Murari jumped from the Kadamb branch into the water to chastise the Kaliya serpent, all the Gopis and cowherd boys went there and cried out, “Oh! Govind! Damodar! Madhav!” 30

After Lord Mukunda had met with Akr00r and entered Mathura to attend theceremony of breaking the bow of Kansa, all the citizens then shouted, “Jai Govind! Jai Damodar! Jai Madhava!” 31

When both sons of Vasudev had actually been taken out of Vrindavan by the messenger of Kans, Yashod sobbed within the house, wailing, “Govind, Damodar, Madhava!” 32

Hearing how the son of Yashoda, who was but a child, was wrapped within the coils of the Kaliya serpent at the pond, the cowherd boys cried “Govind! Damodar! Madhav!” and scurried down the path.33

Seeing the Lord of the Yadus proceeding towards Mathura upon Akroora’s chariot, the cowherd boys, upon realization of their impending separation, said, “O Govind! O Damodar! O Madhav! (Where are you going? Are You actually leaving us now?) 34

At the edge of a lotus forest, a Gopi lay down upon the bed of flowers, deprived of Krishn. Tears flowed from her lotus eyes (as she wept,) “ Govind, Damodar, Madhav” 35

Being very restricted by her mother and father, the lamenting Gopi entered the house, thinking, “(Now that) I have arrived home, save me, O Lord of the universe! O Govind ! O Damodar !  O Madhav! ” 36

Even the ordinary mortals comfortably seated at home who chant the names of Vishnu, “Govind, Damodar” and “Madhav,” certainly attain (at least) the liberation of having a form similar to that of the Lord. 38

Seeing Shrimati Radharani crying from the pangs of separation from Govinda,the blooming lotus eyes of Radha’s girlfriend also filled with tears, and she too cried, “Govind, Damodar, Madhava.”39

O my tongue, you are fond of sweet things and are of discriminating taste; I tell you the highest truth, which is also the most beneficial. Please just recite these sweet syllables: “Govind” “Damodar” and “Madhava.” 40

The knowers of the Vedas say that this is the cure-all of the worst diseases of mankind, and that this is the seed of the destruction of the threefold miseries of material existence–”Govind, Damodar, Madhava!”41

Upon Ramchandra’s going into the forest due to his father’s order, along with Lakshman and Sita, (and thus becoming) a forest-rover, His mother cried, “O Govind, Damodar, Madhava!”

Left there alone, Sita was carried out of the forest by the ten-headed Ravan. At that time, accepting no other Lord, Sita cried, “O Govind! Damodar! Madhav!” 43

Separated from Ram, the daughter of King Janaka was completely anxious, and with the form of Rm within her heart, she cried, “O Raghunath! Protect me! O Govind, Damodar, Madhav!” 44

“O Lord Vishnu, be gracious! Lord of the Raghu clan, cause of the happiness and distress of gods and demons alike, O Govind, Damoadar, Madhav!” Thus Sita cried, (by the time she had been carried) over the middle of the ocean.

Caught by his foot and pulled into the water, Gajendra, his friends all harassed and frightened away, then called out incessantly, “Govind, Damodar, Madhav!” 46

Along with his priest Shankhyuta, King Hansadhvaja saw his son Sudhanva falling into a vat, but the boy was chanting the transcendental names of Hari, Govind, Damodar, and Madhav. 47

Accepting Durvasa Muni’s request (that she feed his thousands of disciples, even though she hadn’t the means to do this) Draupadī mentally called out to the Lord within, the Lord of a forest dweller (like her), and she said, “Govind, Damodar, Madhav!” 48

He is always meditated upon by the yogis as being inscrutable. He is the remover of all anxieties, and is the desire-tree of all that is desireable. His bluish complexion is as attractive as Kasturika. Govind! Damodar! Madhav!49

I am fallen into the deep, dark well of material life, which is full of illusion and blind ignorance, and I am tormented by sensual existence. O my Lord, Vishnu, Govind, Damodar, Madhav, please grant me Your supportinghand to uplift me. 50

O my tongue, I ask only this of you, that at my meeting the bearer of the sceptre of chastisement (Yamaraj), you will utter this sweet phrase with great devotion: “Govind, Damodar, Madhav!”51

O my tongue, O knower of rasa, for release from the hellish bondage of material existence, just worship the charming, easily obtainable mantra that is chanted by Ved Vyasa and other sages: “Govind, Damodar, Madhav!” 52

You should always and everywhere just loudly chant, “Gopal, Vanshidhar, O ocean of beauty, Lord of the worlds, Narayan, O friend of the poor, “Govind, Damodar” and “Madhav”

O my tongue, just always worship these beautiful, enchanting names of Kṛishn,”Govind, Damodar” and “Madhav” which destroy all the obstacles of the devotees. 54

This indeed is the essence (found) upon ceasing the affairs of mundane happiness. And this too is to be sung after the cessation of all sufferings. This alone is to be chanted at the time of death of one’s material body–”Govinda, Damodar, Madhav!” 56

Somehow or other accepting the unavoidable command of Duhshasan, Draupadi, like a frightened doe, entered the assembly of princes and within her mind cried out to the Lord, “Govind, Damodar, Madhava!” 57

“O You who give bliss to the Gopis! Lord of Vraj, You who have entered the forest for herding the cows, O Govind, Damodar, Madhav!” O my tongue, just drink this nectar.61

“O Lord of my life! Upholder of the universe, foe of Kaitabh, Vaikunth, Narayan, holder of the Sudarshan-chakra! Govind, Damodar, Madhava!” O my tongue, just drink this nectar.62

“O uplifter of the earth’s burdens in the guise of a cowherd boy, Lord of sportive pastimes in which Anant-Shesh has become Your brother! O Govind, Damodar, Madhav!” O my tongue, just drink this nectar. 65

O Lord who assumed the man-like form of Rama, who by dint of Your prowess, turned all other kings into Your servants! “O Govind, Damodar, Madhav!” O tongue, just drink this nectar. 69

Even though anyone is able to chant, still no one does. Alas! How determined people are for their own undoing! O tongue, just drink the nectar of these names–”Govind, Damodar, Madhava!” 72