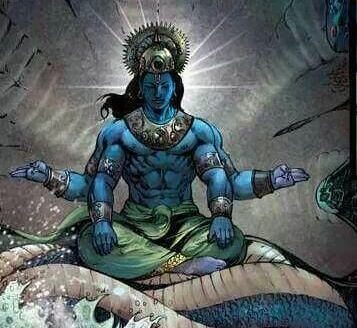 Om Namo Bhagavate Vāsudevāya is one of the most popular Hindu mantras, and the most important mantra in Vaishnavism. It is called the Dwadasakshari Mantra or simply Dwadasakshari, meaning the “twelve-syllable” mantra dedicated to Vishnu and Lord Krishna both. It has two traditions—Tantric and Puranic. In the Tantric Tradition, the Rishi of the Mantra is Prajapati; in the Puranic Tradition the Rishi is Narada. Both, however, say it is the Supreme Vishnu Mantra.

Similarly, this is the ultimate mantra in Shrimad Bhagavatam. This twelve syllable mantra is known as a Mukti (liberation) mantra and a spiritual formula for attaining freedom. The mantra can also be found in the Vishnu Purana.

Vasudev is a being who has evolved from an ordinary human being (nara) into God (Narayan).

Bhagawate– Bhagavate is one who is becoming divine.

Vasudevaya– Vasu means “Life in all beings” Devaya means “God”. This means God(life/light)       who lives of all beings. Other meaning for Krishna is also known as Vāsudeva (Krishna), because He was the son of Vasudeva. In the Bhagavad-Gita, Arjuna called Krishna by the name Vaasudeva multiple times.

Vasudevaya, or the Indweller, is the Divine substance, the knower of all, the giver of all, and the connection of the soul to the three qualities of existence: Sat (truth), Chit (spiritual mind), and Ananda (bliss).

Om Namo Bhagavate Vāsudevaya means “prostration to Vāsudeva” who is variously understood as Krishna or Vishnu.” Krishna Himself asked His devotees to completely surrender to Him:

Translation Abandon all varieties of duties or desires and just surrender unto Me. I shall deliver you from all sinful reaction. Do not fear. [Gita 18/66]

Krishna also proclaimed “Everybody should recite “Om Namo Bhagavate Vāsudevaya” mantra daily whenever possible so that I will stand by them. I respond to the call of the heart immediately and invariably. See Me in your duties. I am committed to those who are committed to their duties. Believe in putting faith in Me and make Me your own”.

Regular repetition of this mantra is said to free the practioner from the cycle of rebirth. It connects us with the Divine and aids us in becoming divine. This mantra brings a peaceful, spiritual and joyful experience to the practioner. The traditional 108 repetitions are practiced in this guided meditation.

Vasudeva Krishna: Vasudeva Krishna is regarded as perhaps the greatest of the Avatars of Lord Vishnu, who takes upon himself the responsibility of safeguarding the mankind and descends on earth whenever the need arises. Krishna played so many roles during his lifetime on earth and taught love, mercy, knowledge, power, wisdom and the highest consciousness to the entire mankind. He remains as the central character of the stupendous epic Mahabharata.

Om Namo Bhagavate Vasudevaya Mantra is a sacred hymn of enormous potential. The effect of this mantra is such that this can provide spiritual guidance for one to attain the ultimate freedom from samsara, the eternal cycle of birth and death. If you read, chant or hear this mantra daily, you will be getting blessings of Lord Vishnu or Lord Krishna. For example, if you touch the fire unknowingly, your finger will burn. Similarly, if you read this mantra even unknowingly, you will be getting blessings of Lord Vishnu or Lord Krishna. It is also said that sage Narada taught child Dhruva the chanting of Om Namo Bhagavate Vasudevaya Mantra , and by reciting this, the Dhruva is said to have obtained the very darshan and grace of Lord Vishnu Himself. It is also believed that chanting this mantra can neutralize sins committed unknowingly. However, it cannot do so when the sins have been committed deliberately. Through this mantra, the ego too dissolves through the ‘fire’ of chanting. After chanting this mantra, Lord Vishnu enters our mind and all good things happen in life.

Chanting Om Namo Bhagavate Vasudevaya Mantra keeps away all the negative energies from you. Chanting creates an invisible circle around you, which attracts all the positive things toward you and you will start receiving all the good news in your life. It will develop the strong faith and devotion to the Lord Vishnu or Lord Krishna. Further, chanting this mantra removes all spiritual obstacles in our life and takes care of us in the afterlife too. Chanting also purifies the subconscious mind and burns our merits and sins of this life and past lives, making it possible for us to attain liberation from the cycle of birth and death. Thus, it dissolves our ego and develops faith and devotion in us, which benefits everyone around us too.

Therefore, it is firmly believed that reciting this mantra with devotion, meditating on it with a focused mind, performing one’s duties with dedication will get for the devotees the boundless grace of Almighty Lord Vishnu or Lord Krishna and His immense blessings.

It can be chanted during pregnancy to bring in a spiritual child.

In the Puranas a story is told of a demon kingdom, where the Queen was pregnant with a divine child. Sage Narada passed through the kingdom and felt sorry for the child, so he taught him this mantra. When Prahalada was born, he was raised by his mother for the traditional 7 years, then his father, the demon king took over his education, telling his demon priests to educate him. Prahalada would not cooperate and learn any evil techniques, so the demon priests reported to the king. The king decided to kill his son. He tried to kill him in every possible way: poison, fire, by tiger in a pit, etc., but Prahalad survived it all. When he came of age, Narasimha, the Avatara who appeared as half Narayana and half lion, arrived in the kingdom. He confronted the demon king. The demon king claimed that he could not be killed by man nor beast, not inside nor outside, not in the day nor the night. Narasimha grabbed him in the doorway at dusk. He told the demon king that he was neither man nor beast, it was neither day nor night, and he was neither inside nor outside, then he proceeded to tear him to pieces. Prahalada took over the kingdom with the help of Narasimha, who did not stay long. Then Prahalada had a long reign using divine principles and the people were happy and prosperous.

This is a great story to emphasize how powerful this mantra is in bringing divine energy into those who will chant it intensely.